The Sun seemed to follow this year’s Mayo Manchester Tradfest on its tour around County Mayo for the week long 7th annual festival which ran from Thursday 1 August to Wednesday 7 August.

Tony Hennigan from Mayo Manchester commented “It’s been a great week again in Mayo, someone must have been looking out for us when we managed to perform all our shows in bright sunshine, the rain showers seem to just break out after we had finished. The festival could not have happened without all our sponsors and supporters in the UK and Ireland, these include; St Kent’s Irish Club, the Levenshulme Pub Company, Rosgal Civil Engineering, Mayo.ie, Ballina Council, Centra Enniscrone and Centra Castlebar, Breaffy House Hotel, The Western People, Ireland West Airport, Achill Head Hotel, Davys Tool and Lawnmower hire in Ballina, The Cot and Cobble Restaurant and Bar, The Dolphin Hotel and Mulherns Bar and Restaurant in Crossmolina and Tarbh47 music venue in Ballina."

The festival was launched in bright sunshine on Thursday 1 August in the rural parish of Attymass in North Mayo by the Minister for Rural and Community Development, Michael Ring TD from Westport, Mayo together with Senator Michelle Mulherin and Deputy leader of Fine Ballina Senator Michelle Mulherin and the Deputy Leader of Fine Fail, Ballina TD Dara Calleary and local Councillor John O’Hara. The opening event featured a two hour live radio broadcast by the award winning Midwest Radio and a host of award winning musicians, singers and Dancers. On the same evening the festival staged a Moonlight outdoor launch concert at Breaffy House Hotel in Castlebar.

The festival then headed West to the beautiful Achill Island on Friday 2 August to enjoy another day of bright sunshine to stage a sunset concert at the Achill Head Hotel with the Fianna Phadraig Pipe Band to celebrate their 71st anniversary with Irish singer songwriter Joe Keegan and flute player John Gibson, the evening was hosted by Alan Keegan from Manchester United. During their stay on the Island they met the internationally famous photo journalist David Ponton and his wife Belinda Mundy from Australia who kindly photographed the group in Purteen Harbour.

On Saturday 3 August on the same day that Mayo beat Donegal in the All Ireland clash in Castlebar, the festival staged their 7th sell-out Gala concert at the Ballina Arts Centre. The concert featured the award winning singers Sina Theil (Irelands hottest New Country Act), Shauna O’Boyle (Crossmolina Festival) and Joe Keegan from the BBC TV show The Voice along with musicians John Gibson and Fidelma O’Brien. Along with the Connacht Fleadh champions – The Foxford Brass Band, The Fianna Phadraig Pipe Band, Centre Stage Vocal Academy and the fantastic Turley Duggan Dance Academy.

Sunday 4th August saw the group head to East Mayo to launch the 101st Claremorris Agricultural show in bright sunshine with Minister Michael Ring before the heavens opened after their performances. The group made a surprise visit to the Bonnifinglas sports day back home at their base in Attymass in North Mayo.

The Bank holiday Monday saw the group officially launch the 70th Bonniconlon show in front of 30,000 people in North Mayo in bright sunshine again. The performance was sponsored by the Cot and Cobble in Ballina which the band made a surprise visit to after their gig at the Bonniconlon show to thank owner Mary Moyles and to entertain her staff and customers enjoying their Sunday Carvery at the very popular venue alongside the picturesque River Moy.

Tuesday evening saw the group head to Crossmolina to help launch phase 1 of the newly refurbished Dolphin Hotel and Mulhern’s bar and restaurant in Crossmolina. The bar is owned by the groups good friends Pat and Mary Mulhern who were born in Lahardane and have companies based in Mayo and Manchester.

The final night on Wednesday 7 August saw the group stage their official closing night party back home in Ballina at the newly opened Tarbh47 music venue on Garden Street which is being run by Gerry Walsh. 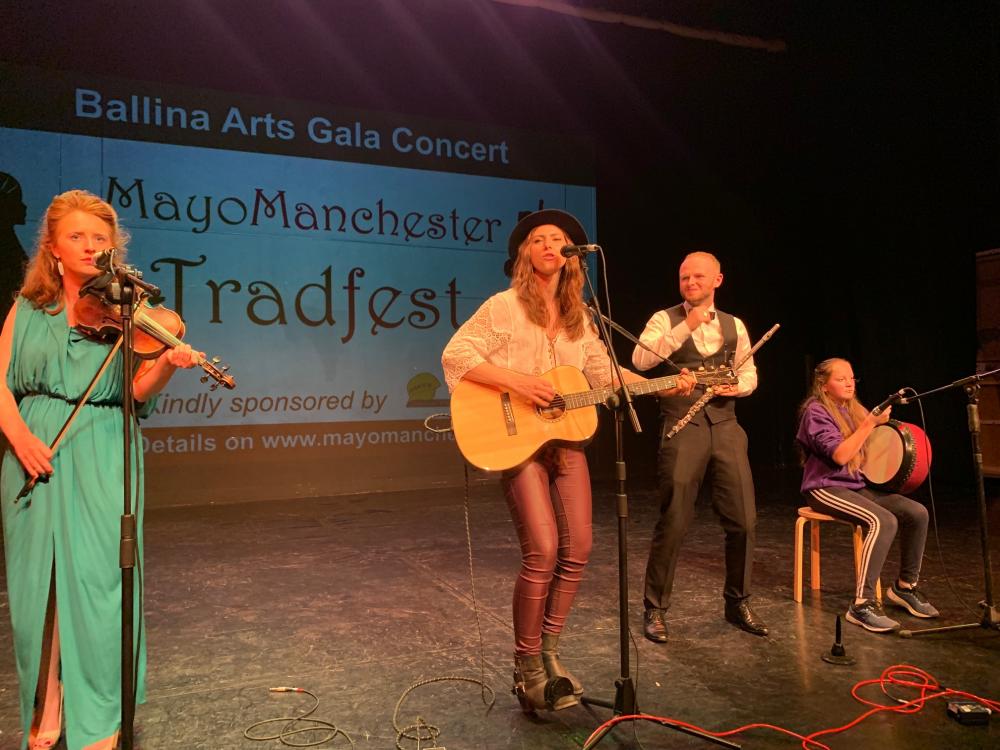 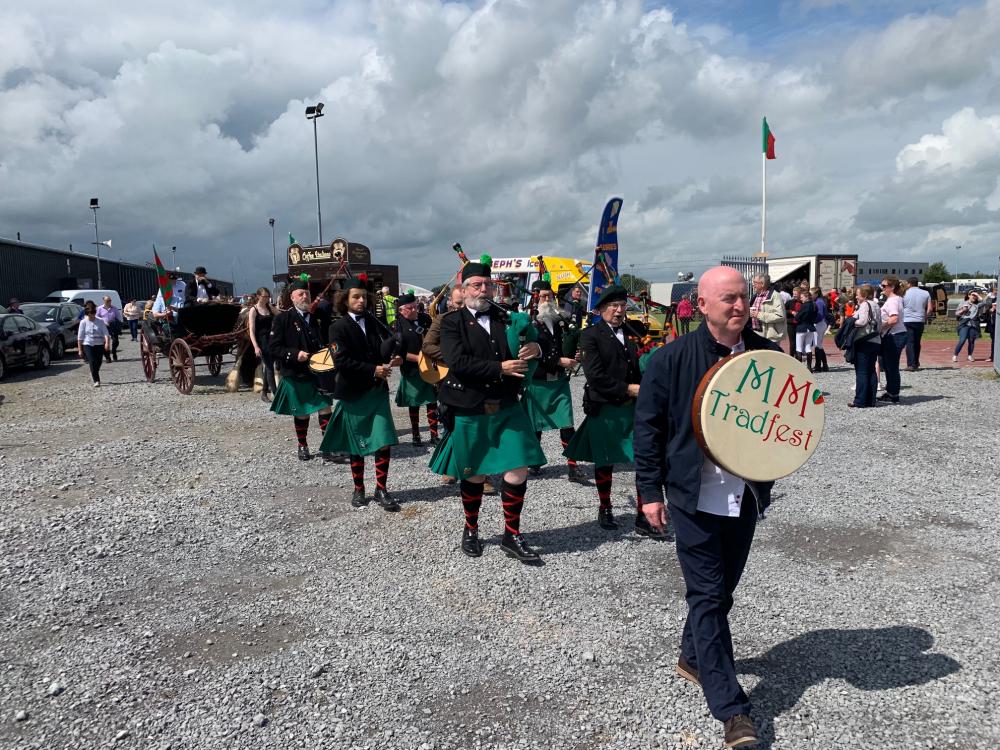 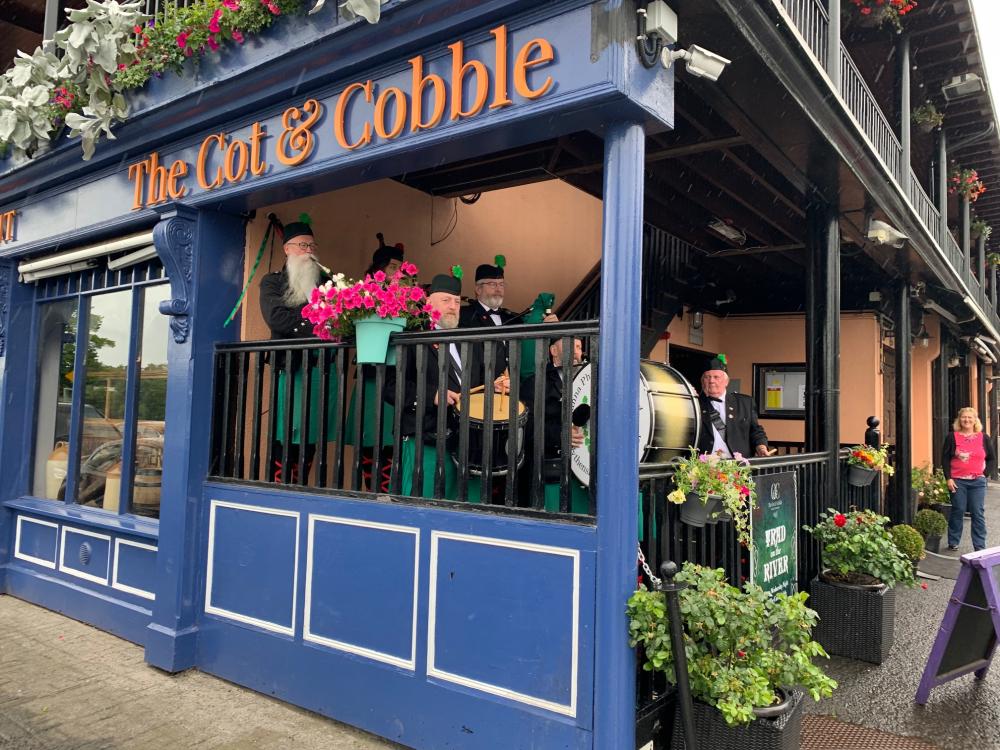 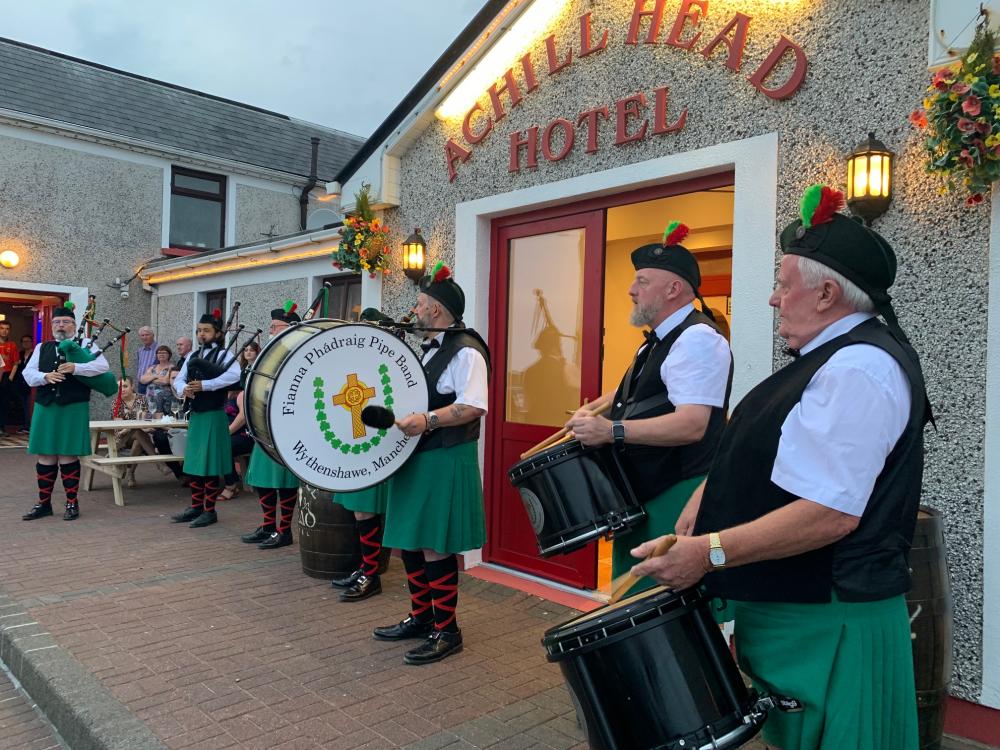 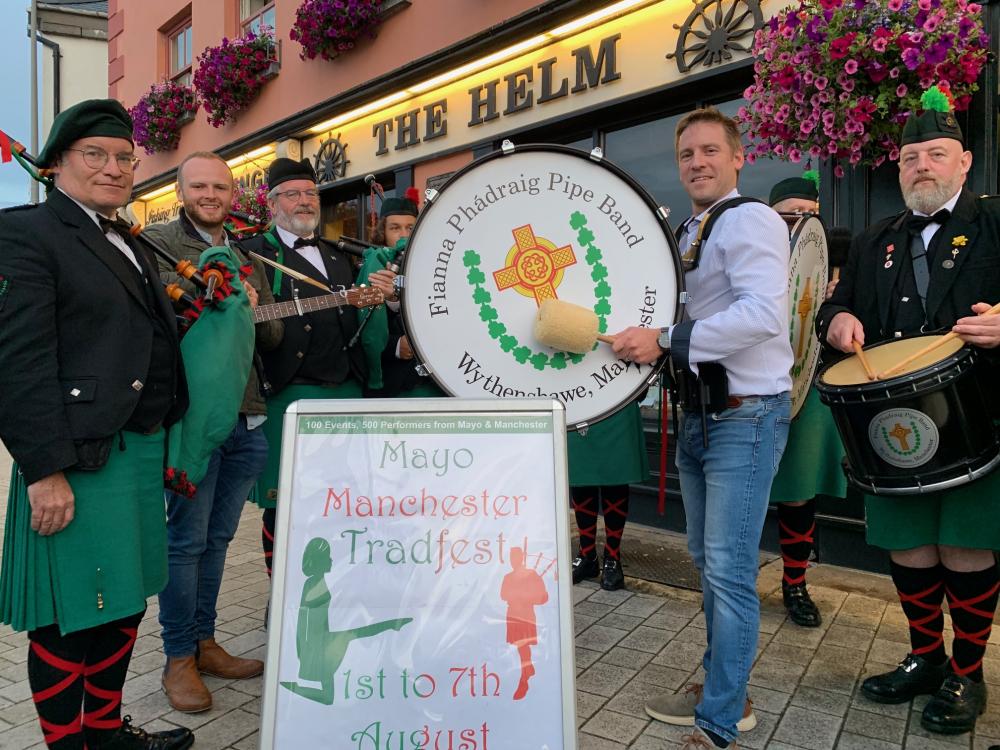 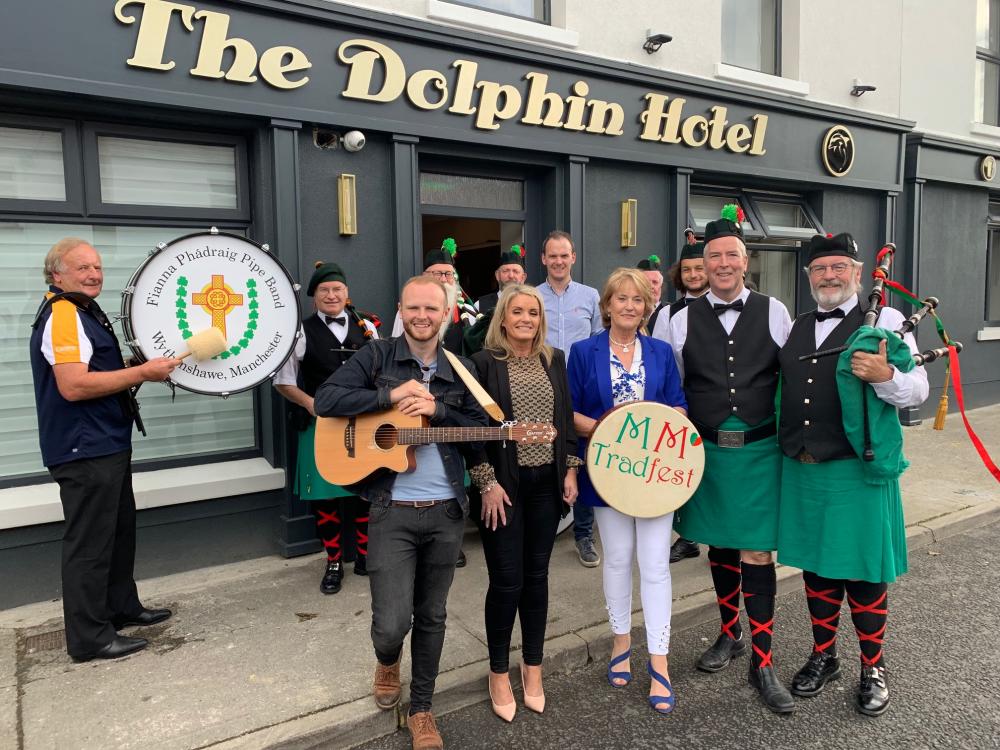